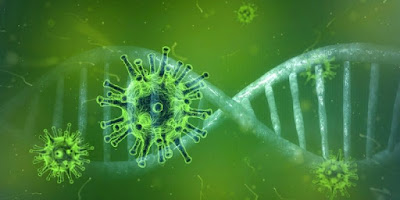 The world has entered a pandemic with COVID-19 spreading like... well, like a virus.  Since I'm a sick bastard with a twisted sense of humour, I figured it was a great time to bring you a Top Five List of Viral Outbreak Movies! 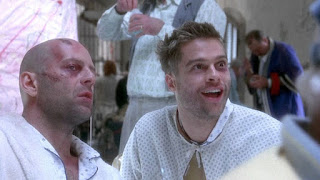 "12 Monkeys" (1995)-  In this film, Bruce Willis is sent from the future to prevent the release of a virus by eco-terrorists that'll wind up wiping out the majority of humanity- and pushing them underground.

Bruce Willis and Brad Pitt put in great performances in this film.  The book is pretty good too. 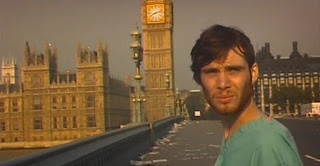 Great acting, great mood, and a realistic sense of isolation.  Especially note worthy for introducing the concept of the "rage zombie" to the genre.  Definitely a film to watch while the streets empty of people hoping to avoid COVID-19.

"Cabin Fever" (2002)-  A group of friends go to an isolated cabin... only to discover that a flesh eating disease has started to spread amongst them...

One of the "gooier" of the virus films.  The pre-empted "finger bang" scene probably accounted for the lack of foreplay women received around that time... *shudder*

"Masque of the Red Death"(1964)-  A wealthy nobleman is holding a party filled with debauchery and depravity.  A mysterious red clad guest arrives... and death soon follows them...

One of the better Roger Corman adaptations of an Edgar Allan Poe story.  I have always had a soft spot for this movie.. 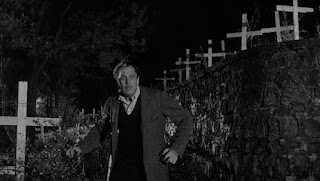 "The Last Man on Earth" (1964)-  A virus has swept the world- turning people into blood thirsty undead.  Only one man remains... bound and determined to rid the world of the vampiric menace...

Another film I have a soft spot for.  Based on the book, "I Am Legend" by Richard Matheson.  Surprising, Matheson said that although it was the closest retelling of his story... he wasn't a fan of it. 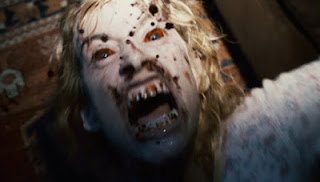 I'm not going to say much else.

I'm just going to direct you to my review of it, if you hadn't read it previously.

And there you have it- my Top Five Virus Outbreak Movies... and the worst one.

Amelia is trying to raise her son alone after the death of her husband.  One night, she reads a strange book called "Mister Babadook" to Sam- a book that warns that the Babadook will never stop tormenting you once you become aware of it.

Soon, they become of something dark in their lives... a dark thing that just won't go away...

"The Babadook" is one of those movies that works on a metaphorical level in addition to the literal "what's on the screen" way.  The theme of dealing with grief is very much an element behind the horror in this movie, and adds a level of depth and relatability to it.

The story is very similar to many other "ghost in the closet" movies, but is strengthened by the thematic element, and the strength and believability of the characters.  I wanted to find out how the characters ultimately dealt with the events unfolding, and how th…
Post a Comment
Read more

November 29, 2012
I'm a fan of Edgar Allan Poe, so it was a pleasant surprise that one of the movies I watched during "Terrorpolooza 2012" was an adaptation of one of his stories...

Genevieve has come home to claim ownership of her deceased uncle's  house.  Soon, however, she discovers the tragic details behind her cousin's death- details that could cost her mind... and her soul...

"The Oval Portrait" isn't a perfect film, but I still found it enjoyable.  The story is simple, but is strengthened by the backstory of the cousin's death.  The pacing isn't too bad, though fans of horror movies that get right into the scares might be put off by the slower pacing and build up.  The story itself isn't so much frightening as macabre and disturbing... which is to be expected of a Poe story, actually.

While Genevieve is a little flat, the characters of her cousin and the Confederate soldier she loved help to make up for that.  The uncle was interesting as well, and…
Post a Comment
Read more

October 09, 2012
One of the staples of horror stories is that often, the past returns to haunt and torment the characters involved.  One such story of the past reaching into the present for revenge is "Nathaniel" by John Saul...

After the death of his father under mysterious circumstances, Michael Hall and his mother move to Prairie Bend to spend time with his grandparents.  Soon, a voice starts to whisper to him from the shadowy ruins of a barn- propelling him to discover why the town is so fearful of births... and who Nathaniel is...

John Saul, in my opinion is on the same level as Stephen King when it comes to writing horror fiction- though his stories are a bit more subtle, and build at a slower pace.  I really quite enjoyed "Nathaniel".

First off, the style is very atmospheric and moody, without exagerating the details.  Saul doesn't paint every errie detail, but allows the reader to let their imagination creep along the dimly lit hallway to the door where the monster is w…
Post a Comment
Read more