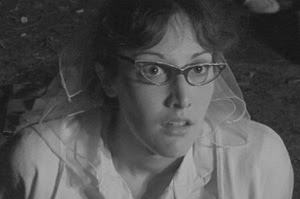 When I'm feeling down, I enjoy popping either an animated film, or a B-movie into the machine and watch it while nibbling on popcorn or cheesy poofs.  I was in that sort of mood when I sat down to watch, "The Monster of Phantom Lake"...

Professor Jackson, and his assistant Stephanie are studying the local ecosystem of Phantom Lake, when they come across a new species of algae- algae that seems to have somehow combined with human DNA.  While they struggle to find the cause, a group of teens are having a campout nearby... only to be attacked by a plant-like humanoid figure.  Is THIS the source of the strange algae... and who will it kill next?

"The Monster of Phantom Lake" is not intended to be a scary movie.  It is a humourous tribute to the classic, cheesy B-movies of the 1950's- and does it quite well.

Like most of the B-movies of the 1950's, the camera work isn't complex- though there are some decent shots.  The editing was good at creating a decent pace to the story- which helped make up for any lack of "originality" in the camera angles.

If you're looking for "serious" acting- don't watch this film.  The acting is silly and exaggerated in parts- just as it was meant to be.  I often found myself smiling and chuckling at the rather hokey way lines were delivered, and the satirical way the hero would pose once in awhile.  The characters are likable, and the actors did a great job bringing their silliness to life.  Josh Craig as Professor Jackson was quite enjoyable to watch- as was Leigha Horton as Stephanie (I have to admit, she was nice to look at too). I also felt that Deanne McDonald- who played Elizabeth was great in the role.  Loved the glasses she wore. LOL  Another great pair of actors were Michael Cook and M. Scott Taulman as Gustav and Sven- the canoe riding park rangers.  All together, the cast really made this film one to chuckle over as I remembered some of the other great B-movies I'd seen over the years.

The costumes were simple, yet effective.  The best example of costuming was actually worn by McDonald in her role of Elizabeth.  I could honestly see her as a teenage girl back in the 1950's.  I think hers was the most complex of the "period clothes" worn by the cast.  The monster's custome was laughable- but in a good way.  It made me think of a lot of the monster type costumes I thought of creating for Halloween- as well as a few I've seen in the low budget movie industry.  I couldn't help but snort with amusement when I saw the monster.  I loved it!

The story is- like most of the movies from the era it's paying tribute to, was simple, yet provided plenty of room for the shenanigans on the screen.  The premise suited this movie perfectly, though they could've had more with the monster in it.

Before I give my verdict on "The Monster of Phantom Lake," I want to give a big "Thank you!" to Christopher R. Mihm for not only directing/producing this lovely piece of humour, but for sending me this- and a couple other of his films for viewing and reveiwing on "The Corner of Terror".  If readers want to learn more about him, and his films, check out his website!

If you want a silly and enjoyable break from the rather dreary flood of remakes/reboots, and unoriginal horror films out on the market, I would recommend watching, "The Monster of Phantom Lake"- especially with friends.  I'm placing this movie in 'The Good".  It helped to make a dreary night more enjoyable for me.