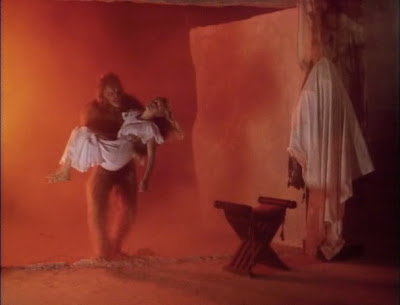 Sometimes, a director/producer will surprise you- such was the case during "Terrorpolooza 2012" when I watched Charles Band's "Meridian: Kiss of the Beast"

Catherine Bomarzini has come home after her father's death.  Needing company, she asks Gina to stay with her.  Soon, the two meet a wondering troupe of performers that Catherine invites to dinner at her castle. Catherine find herself pulled into a love triangle and an ancient curse that only she can break.

After watching movies like "Evil Bong", and "Demonic Toys", I really wasn't expecting too much from this Charles Band movie- but I was pleasantly surprised by it.

The story is actually quite interesting with lots of potential for eerie scenes, and character development.  It's a nice twist on the classic "Beauty and the Beast" story.  It's a bit slower than most of Band's other works, but moves smoothly and draws you with it.

I have to admit that the Beast, and his brother are actually more interesting than the main character Catherine.  This isn't to say she's not interesting, because she does have depth and was engaging.  I just found myself more curious about the two brothers and their history than Catherine breaking their curse.  I also really liked the housekeeper, Martha (there's a nice twist with her character that pleased me), but I found the character of Gina to be somewhat superfulous and without any real purpose to the story.  She's just kinda that- which is sad, since Charlie Spradling is a gorgeous woman.

For a Charles Band movie, the acting in this one was also quite surprising.  I was quite impressed by it.  Malcolm Jamieson did a remarkable job as Lawrence and Oliver- the brothers.  He balanced out Lawrences darkness with Oliver's lightness quite well.  He brought a lot of depth to his performance, and really made me want to know more about the characters.  Just a wonderful job.  Sherilyn Fenn not only looked great, but turned in another good performance as Catherine, though as I said before, I found myself more interested in the brothers' story than hers.  The performance given by Hilary Mason as Martha was great as well- despite not having a lot of screen time.  The only disappointment was Charlie Spradling as Gina.  It's not that her acting was bad, because it wasn't.  The problem was that her character wasn't really necessary.  I got the feeling that the character (and the actress) was simply there because they needed a really nice set of boobs (other than Fenn's nice ones) for the nude scene.  I'm not complaining about her boobs, just that she deserved a slightly more important role in the story itself.

I found this movie to be quite pleasing visually too.  Band is known for interesting visuals, but he really manages to use the visuals to create a dream-like mood, and tell the story.  Just a beautiful piece of work in my opinion.  At times, you're not sure if you're watching a dream sequence, or not.  The look of Oliver as the Beast was also quite a surprise given what I've seen in his other films.  While many of the costumes in Band's movies are quite cheesy and silly, the Beast's design was quite good.  The facial make-up did a great job of allowing the actor to still express emotion while remaining beastial.

In the final analysis, I'm going to say that "Meridian: Kiss of the Beast" is a movie I think everyone should watch and that I'm hoping Charles Band will provide me with more pleasant surprises like this one.  I'm placing it in The Good.