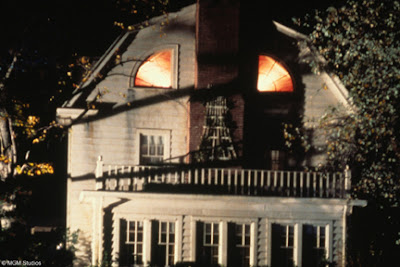 When it comes to movies, the horror genre is one of the few where houses are as much a character as the humans.  Certain houses are immediately identifiable with certain movies:
George and Kathy Lutz have just moved into 112 Ocean Ave- where a brutal mass murder had occured just the year before.  Soon, however, their dream house becomes a house of horrors and the couple must fight to protect their children from the evil that resides with them... and keep it from causing history to repeat itself...

There has always been controversy regarding the background for the movie, since it's based on a book documenting the experiences of the real-life Lutz family.  Because of this controversy, the subject of the validity of the "Amityville Horror" is one that fascinates most people interested in the paranormal.  Even though I research the paranormal myself, I'm going to simply concern myself with the movie itself as entertainment, rather than a factual film.

James Brolin, who plays George Lutz was given a copy of Jay Anson's book to read since there was no script at the time.  While reading one of the creepier sections, a pair of pants that he'd hung up fell.  Brolin jumped in fright, and decided to do the film.

The film is actually quite entertaining, if not a little dubious for those that haven any serious knowledge of the paranormal.  The story is well crafted scriptwise, and decently paced- though slow at moments.  The special effects are simple, but effective for the time period.  While, the movie isn't very action packed in terms of scares, the build up of tension and mood is good.  If anything, my only complaint has to do with the acting.  Brolin looks great in the role- in fact he looks amazingly like the REAL George Lutz, but his acting is a bit stiff and wooden, while Margot Kidder as Kathy made me want to tell her to shut the hell up... but then again, I tend to want to tell her that in most of the movies I see her in.

While this isn't a film I'd haul out on a daily basis, I would have no problem watching it once a year- especially if I'd been reading the book as well.  I am going to place, "The Amityville Horror" in "The Bad"