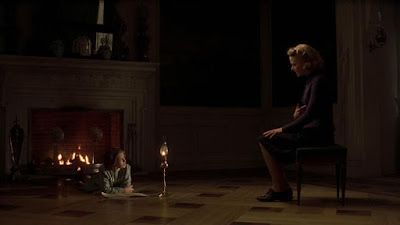 Ghost stories are one of the hardest things to do visually without resorting to extensive CGI or gore to bring the scares.  Finding a good, solid, suspenseful ghost movie is a challenge for someone like me.

Living in an isolated manor during World War Two, the Stewarts find themselves alone and depending on each other to survive the threat of invasion.  Adding to their isolation is the affliction that affects the two children.  One day, they hire some servants... only to find that they'd brought "The Others" with them.

Or maybe "The Others" were there all along already...

This is not a fast paced story.  It slowly builds and builds.  It slowly, but surely adds on the suspense, the unease, the creepiness until you're looking over your shoulder into the shadows of your closet or under the bed.  The characters all get equal time and development as the story progresses.  They all serve a purpose to the unfolding of the tale.  I could imagine someone telling this story around a crackling fire while the flickering light dances across their face like spirits waving tendrils of mist in time to the cadence.

ALL of the actors, whether they had a lead role, or a supporting role were great.  Nicole Kidman and Fionnula Flanagan especially stood out- as did Alakina Mann.  These three women were the driving force behind the events of the movie, and they drove it with deft skill and natural (or supernatural if you will) ease.

I loved the look of "The Others".  The general earth tones, with an occasional spot of colour really helped to create a unreal atmosphere when paired with the superb use of candles, kerosene lamps, and fireplaces for lighting.  The way the shadows lay across the sets and characters accentuated the feeling of isolation and being trapped.  There are some spectacular camera angles and edits that move the story along at a steady pace.

"The Others" is one of those rare ghost stories that gets it right from beginning to end.  I would definitely recommend that people give it a watch- and possibly add to their collections.  Without a doubt, I'm giving it a spot in "The Good"