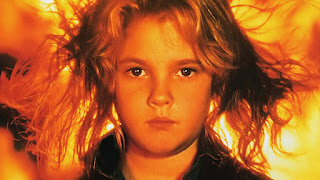 We're back with a new review!  Yaaaaay!

This week, we're checking out a Stephen King adaptation from 1984- "Firestarter"!

Andy McGee and his daughter, Charlie, are on the run.  They are running from a mysterious agency known only as "The Shop".  They're running because The Shop wants Charlie for her abilities.

The ability to set things on fire... with just a thought...

This is one of the earliest adaptations of a Stephen King novel.  Originally, John Carpenter had been tapped to direct, but was replaced when "The Thing" proved to be a financial failure (little did they KNOW).  The new director, Mark L. Lester commissioned a re-write that kept fairly close to the original novel.

The story isn't bad, though not really scary.  The slow, plodding pace, and rather stiff dialogue actually make it a little dull and the equivalent of white noise.  It's came across as insignificant background noise.  I found myself drifting off and thinking of other things, rather than being engaged in what was happening on the screen.

The characters, as portrayed in the movie, are pretty thinly developed.  There's no real emotional meat to them that would allow you to actually connect and relate.  They were like, paper puppets- which is sad, because you performers like George C. Scott, Martin Sheen, Art Carney, and a young Drew Barrymore.  They're great actors, but the script and characters were hollow.

As a Stephen King fan, I have to confess that I was rather disappointed in "Firestarter".  I really can't recommend it for viewing.  I'm going to have to give it an "Ugly".