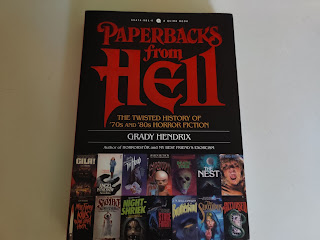 Today in "The Corner of Terror," we have a special Guest Reviewer: Jason H from "From the Basement", so let's see what offering he brings to our dark corner of the internet...

There was a time when books were sold pretty much everywhere. Grocery stores, drug stores, smoke shops, you name it. And individual paperbacks could sell 12 million copies in North America alone. That was back when writing a best seller really meant something.

This was the 60s, 70s, and 80s, and one of the most prolific – and profitable – genres was the horror novel. What set these books apart from their modern counterparts was an unashamed desire on the part of the writer to gross out, offend, titillate and, at times, outright disturb.

Or, at the very least, baffle.

Psychic Nazi dwarves who enjoy S&M? These paperbacks had them. Armies of mutant rats eating the populace of London, England? You betcha! Mystics that bite off young boys’ penises? But of course.

This was a time when anything that could go, went. Political correctness hadn’t been invented yet. And the goal of any publisher was to sell, sell, sell. Welcome to the era when Paperbacks from Hell ruled the book racks!

Horror author Grady Hendrix explores the tropes, trials, and tribulations of this “literary” period in his book "Paperbacks From Hell", shining the spotlight on these often forgotten books. But not so forgotten that, once I caught a glimpse of many of the beautiful covers, I was taken back to my youth when I spent a good hour wandering the book sections of drugstores and shopping marts, perusing these titles while my mom shopped.

Hendrix, who’s penned such witty modern horror as "My Best Friend’s Exorcism" and "Horrorstore" (this one is about a haunted Ikea) brings humour to the exploration… because how could one not? Some of these books sound downright silly, but were played completely straight and went for the jugular more often than not.

He dedicates equal attention to the cover artists, many of whom painted their work because, well, computers didn’t do graphics back then. And his focus isn’t on the big guns like Stephen King, although he does get some mention, but lesser known – but no less prolific – writers like James Herbert, J.N. Williamson, and Ruby Jean Jensen.

This book is a hoot to read, and is a fun trip down memory lane to simpler times. Hendrix was also kind enough to start a "Paperbacks From Hell" publishing line, bringing many of these long out-of-print-novels back on the market. I appreciate this, but my bank account doesn’t as I’m tracking down many a title as we speak. These books certainly sound like they’re a lot more fun read than many modern publications.

As you can tell, "Paperbacks from Hell" is a" Good", and I highly recommend it for fellow horror fans.