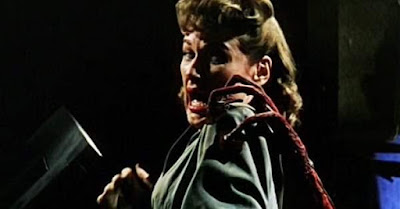 Some might argue Byron Haskin’s adaptation of H.G. Wells’s classic novel is more sci-fi than horror, and technically, they’re right. But the story of Martians attacking Earth, and pretty much kicking our collective asses all over the planet, is a scary one. And Haskin delivers scenes of mass destruction and human tragedy with such panache and gritty realism (for the era) that this film is still horrifying.

That’s my pretzel logic on the matter, anyway.

Owing more than a bit to Orson Welles’s famed Halloween radio broadcast, this version quickly brings audiences up to speed on the Martian plan, and settles in on a small California town that becomes the focus of much of the film. As with the radio version, the Martian reveal is slow at first, building suspense and drama, before the attack happens.

Haskin and screenwriter Barre Lyndon borrow heavily from Welles for the first half hour, but that’s fine. It’s understandable, given what a landmark production his radio play was. Spielberg and company did much the same at the outset of their 2005 adaptation, only taking from this movie instead.

Even by today’s standards, some of the action and scenes of destruction- especially during the film’s final act- are harrowing. The devastation of Los Angeles particularly so. It helps that we care about the heroes: square-jawed scientist, Clayton Forrester and his lady love, Sylvia- who has the classic good looks of a pin-up model thanks to actor Ann Robinson. We like them.  We want them to survive and be together, hence the action works.

This version of "War of the Worlds" has aged well. Sure, some of the effects are dated, and things slip into melodrama, but this was the 1950s, and things were different than. But good filmmaking stands the test of time, and this film still packs a cinematic punch. A Good.