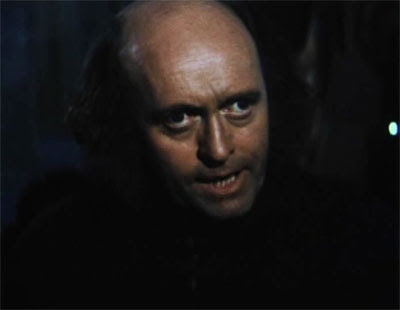 Most movies TRY to make sense, while others come nowhere CLOSE to it...

After breaking up with his girlfriend, Mario is sent on an assignment to take nature pictures in a remote mountain range.  When he meets the lovely Delia, the two find themselves entangled in a web of strange occurances, mysterious figures, and terrifying secrets centered around an old abandoned village...

This week, there were TWO winners during the "What Movie Wednesday" feature.  "The Witches Mountain" is the first of two movies that I watched, and will be reviewing.

The premise isn't bad: an abandoned village house a coven of witches is discovered by a couple traveling.  The way the story is told, however, is rather disjointed and dull.  There isn't much logic from one scene to the next, and it's rather repetitive.  Characters would be doing one thing- running through the woods one moment, then laying in a dungeon next to some guy chained to the way the next... then sitting in the jeep a second later.  Or, the characters would go witness something, run away... then go back again.  The best- and interesting part was at the beginning where Carla (Mario's ex-girlfriend) finds her cat dead, and sets a little girl on fire after it says it's supposed to take her to "The Others" (not the movie).  That scene made me sit up and and think that I might be getting a quickly paced, tense movie.  The rest of the movie can be summed up in two words: Epic Fail!

There were only two characters that I actually found intriguing in this movie.  I thought the Old Village Woman was interesting, and I liked Delia as well.  I had a hard time liking Mario though.  I found him... sleazy- almost a stereotype of a 1970's bachelor.  True, this movie was made in 1972, but I still found him less than charming.  I really found the Inn-Keeper to be more annoying than likable- mostly because of the amount of time that was eaten up with characters saying everything they said to him twice as the character was hard of hearing.  Carla wasn't in the story much, but I was interested in her since she was the one that set the girl on fire before the opening credits... I really wanted to know what the heck her deal was.

The best performance in this movie was given by the woman who played the Old Village Woman.  She was natural, and believable in the role.  Victor Israel as the Inn-Keep was just... well annoying due to the repetitiveness of the hard of hearing gag- though he did have some good lines.  Cihangir Gaffari as Mario (credited as John Gaffari) wasn't bad, but not great.  He kinda had one or two facial expressions throughout the film, and that was it... not to mention his mullet-like hair, porn mustashe, and thick chest carpet.  I felt that Monica Randall did a decent job of portraying Carla.  Even though she wasn't in the movie much, she managed to get across that her character wasn't just a bitch... but a psychotic one too.  While I felt that Patty Shepard was beautiful to look at in the role of Delia, I found her performance to lack expression for the most part.

Since the story itself was so disjointed and jumped from one thing to another, I'm inclined to think that it affected the editing of the movie.  Despite the rather jerky and odd editing style, there are some wonderful sequences.  The opening scene for instance where Carla sets the girl on the fire was great.  Another scene that stands out for me is when Mario is taking photos around the village.  The way that the shots of him taking photos is cut with shots of black and white photos showing stuff that's not there was really well done.  There are some scenes where it was hard to see what was going on due to how dark it was- but I'm willing to chalk that up to the quality of film and the lighting used at the time.

While, I did enjoy certain aspects of "The Witches Mountain," the extremely choppy editing, poor story cohesion, and bland characters earn this movie a place in "The Ugly."

I want to thank everyone that participated in my "What Movie Wednesday" feature.  I'll be doing it again on 27 June 2012.  Also, make sure to read my review of "Demonic Toys" tomorrow!

Big thank you to the following people who voted for "The Witches Mountain":

March 30, 2019
Sometimes, sequels are better than the original.  Sometimes, sequels are as good as the original.  Often, sequels are worse than the original... While rummaging through an abandoned house looking for scrap to sell, Sonny and Sam come across a mysterious chest in a hidden room.  Inside the chest is a strange, locked book.  Opening the book releases Slappy the Dummy... and all the chaos that follows him. Soon, it's up to these two young men, and Sonny's sister Sarah to save the town from the haunted Halloween... I wanted to like this movie.  I wanted this movie to give me something different from the previous one.  Really, I did. The story and plot is essentially the same as the first movie with only minor tweaks.  Because of this, I found my attention waning from moment to moment.  The scenes with the garden gnomes, and the gummy bears were enjoyable though. The characters aren't bad, but rather cookie cutter for teen type family horror movies. The acting was
Post a Comment
Read more