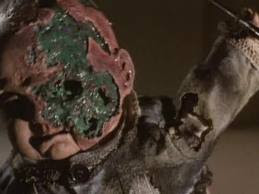 A couple of weeks ago, I had a "What Movie Wednesday" double feature, with "The Witches Mountain" being one of the movies, watched... and "Demonic Toys" the other...

After her partner and boyfriend is killed in a bust gone wrong, police officer Judith Gray chases the killers into a warehouse where toys are stored.  When one of the criminals is killed, it awakens a slumbering evil that'll use anything it can to get what it wants... including your sweet adorable teddy bear...

"Demonic Toys" is brought to us by Charles Band- who also made "Evil Bong".  Knowing that, I wasn't really expecting much from this movie.  I have to say though, that I certainly found this one more entertaining that the previous one I'd seen from him.

The story is simple, but fitting for a B-movie like this one.  It certainly provided a decent enough skeleton for the demon possessed toys to go on the rampage they do.  This movie was meant to be cheesy and fun- and it was.  There's no attempts at depth, or even a serious contemplation on the nature of good and evil.  Despite that, I found myself actually engaged by this silly piece of fluff.

The characters are typical late 80's to early 90's cheesy horror movie characters.  They do provide enough depth for Judith Gray and her partner for you to want her to survive the assault by the toys.  While lacking any real depth, the character of "The Kid" was still interesting as a villian.  The remaining characters- even the secondary lead, Mark Wayne are basically just fodder for the grue.

The acting is pretty laughable.  Now, I don't know if that was the intention or not, but I was shaking my head at the actors.  The only two that seemed to actually put any real effort into their roles were Tracy Scoggins as  the female cop Judith, and Daniel Cerny as The Kid.  Cerny especially was fun to watch.  The remaining cast were pretty over the top and ridiculous- which isn't necessarily a bad thing in a horror comedy... but they came close to crossing the line into just plain bad acting at times.

As with "Evil Bong," the camera work is pretty simple and plain, though there are some decent moments and shots.

The toys?  While actually rather silly, they were quite enjoyable entertainment.  Grizzly Teddy and Baby Oopsy Daisy are the main ones that create most of the grue that occurs.  Not even the rather poor manipulation of the dolls took away from the fun of watching Grizzly Teddy gnaw on someone's face, or Baby Oopsy Daisy's horrid puns when killing an unfortunate victim.

The grue was pretty good too.  I was surprised at how well they made it look when a person was getting chunks ripped off their cheeks, etc.  If you like grue, you'll probably enjoy what's on offer in this movie.

In the final analysis, I'm going to have to say that I would recommend "Demonic Toys" as part of a cheesy B-movie night with plenty of beer, pizza and friends.  I would probably even re-watch it if I was in the right mood.  Because of that, I'm going to declare it a bit of a guilty pleasure, and place it in "The Good"

Special Shoutout:
I want to thank everyone that participated in my "What Movie Wednesday" feature.  I'll be doing it again on 18 July 2012.
Big thank you to the following people who voted for "Demonic Toys":